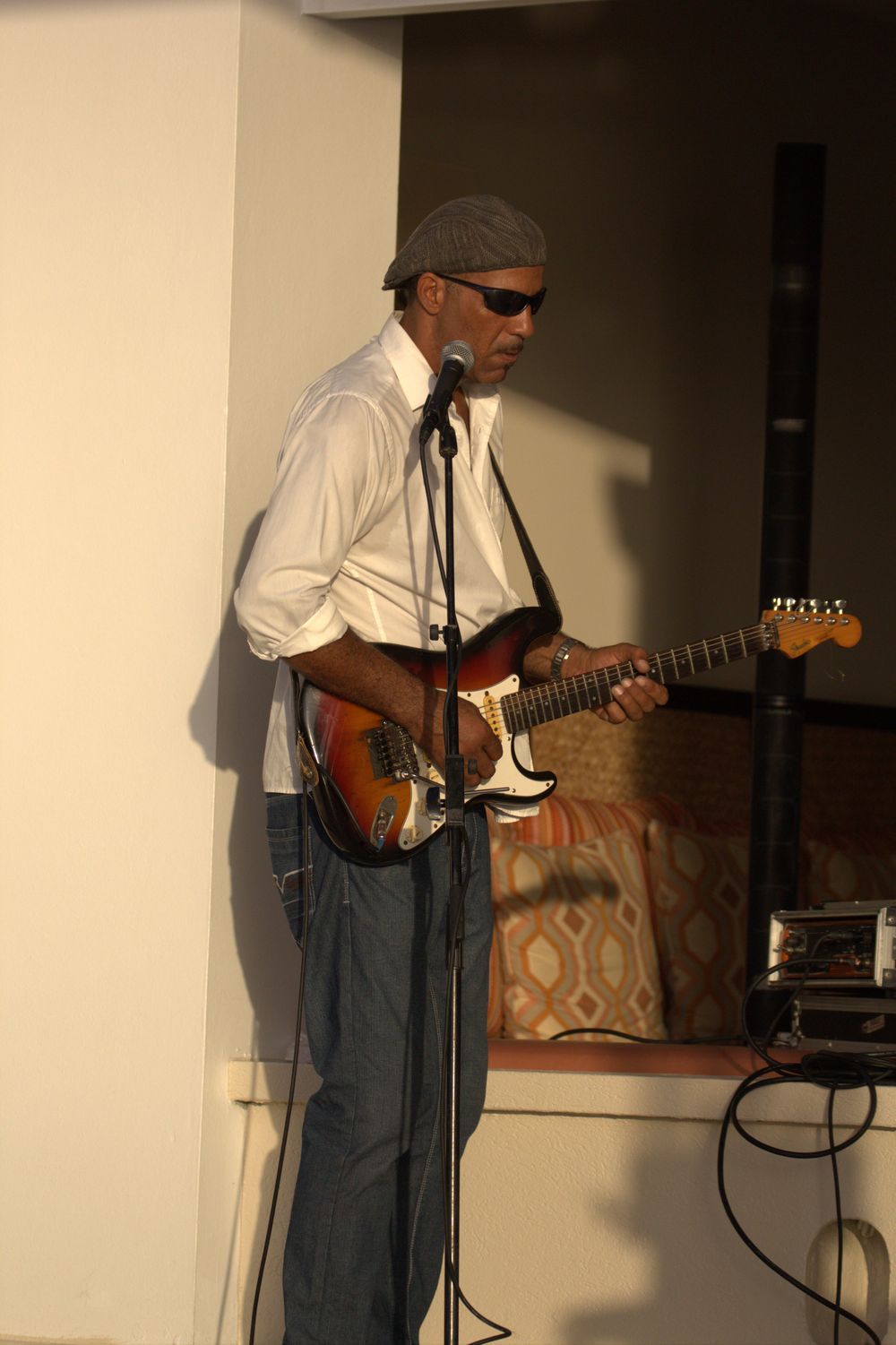 Carl Gustave is a guitarist, singer, songwriter and producer. His musical style is a melting pot of blues, jazz, rock, reggae, and soul with a dash of latin flavor. He has performed for audiences from around the world either as a solo artist or with a group, delivering his set with conviction and honest emotion.

Born in New York of St Lucian parentage, Gustave began his musical journey in Los Angeles, California performing his original music after high school in clubs on the Hollywood strip and other venues around town. Carl got hooked on creating original pieces in the studio creating studio demos after procuring a Professional 8 track recording machine and mixing desk in 1992 from a friend. While working his day job as a building contractor, one of his clients, David Kitay, a Grammy winning arranger/composer, listened to a demo after an impromptu jam session and ended up producing several songs. These form the heart of Carl’s debut CD: “Too Hard” released in 2002.

Before coming to St Lucia, Carl received a Peabody Award in the U.S. for the song: "I Won't Do You No Wrong" which he co-wrote with film composer Richard "Koz" Kozinski. Carl wrote the lyrics, sang, and played lead guitar on the track. This song was first aired on "The ABC After School Special" in 1998. He has performed or recorded with members of the Chick Corea Band, members of theTuesday Night Music Club, the Don Henley Band (of Eagles fame), Sheila E, David Kitay, David and David, members of Kool and The Gang, Phil Upchurch, Marcus Miller, Rick Braun, Jonathan Butler, Jeff Gotlieb, members of Maze, Clarence Clemons, as well as seasoned blues veterans such as John Houston, Louisiana 'Guitar' Red, Coco Montoya, Joe Louis Walker, Bobby Picket, Leon Ruebenhold, and others. He has also performed or worked with many of the top artists and producers in St Lucia and the Caribbean.

Carl Gustave has been a part of the St Lucia Jazz Festival scene for the last 16 years. He has also performed at other festivals in the Caribbean including Cayenne Jazz 2007, Mustique Blues Festival 2007, 2008, and 2011, and as a main stage performer at the St Lucia Jazz Festival in 2010 with his UK-based band. Gustave was a must-see performer relied on to bring the house down at the once famous Jazz on Grill. He created and hosted the Grand Finale Jam at this venue from 2010 -14 showcasing exciting performances from his international band of Best Musical Friends,"BMF". He performed on St Croix, opening for the top reggae band, Midnight in 2015, and at the Marie Galante Terre du Blues Festival 2016 as well as performing at St Lucia Jazz events.

Carl has also performed at numerous private, high profile, celebrity and diplomatic functions in St Lucia, Los Angeles, the Caribbean and in London on small and large stages. He has been performing regularly at the best hotels and bars in St Lucia since 1999. Carl hosts his musical friends and records at the home he calls Windsong Villa, which he designed and built in 2009. The home provides creative inspiration with amazing ocean and sea views overlooking Martinique and St Lucia's historical Pigeon Island.

Carl's music can be found on the web at www.cdbaby.com or on www.itunes.com. For booking information contact: carlgustave@carlgustave.com, or check him out on Facebook